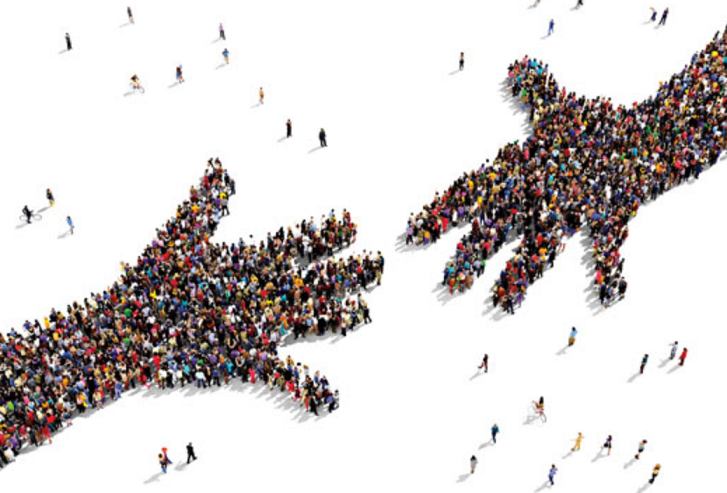 Let me pose an easy, but intriguing question: when you walk into a room full of people, what will you normally see? A decade or so ago, the answer to this question would simply be: people socializing, talking to one another, getting to know one another – having direct, face-to-face interaction. However, these days, it would be something more like silence, eyes staring at screens, and hundreds of conversations going on between people not present in the room itself.

Now that we have ascertained that social media does indeed impact interpersonal relationships greatly, we must ask what exactly that impact is and how it affects relationships – and like all things, there are both positive and negative aspects to consider. From how we have defined social media, it is apparent that social media’s purpose is for the enhancement and development of interpersonal communication, and because of this purpose social media has been able to accomplish a great many things. One of these being instant messaging – this is probably the most practical contribution of social media to modern society. Anyone anywhere in the world at any time can be reached instantaneously as long as they are connected to social media. This bridges the large communication gap left by distance and time.

The extent of social media is worldwide, meaning that people from all countries are all interconnected through the medium called social media. This creates countless possibilities for people of any age, race, or nationality, in terms of communication. It also benefits existing relationships that have been separated through distance – social media becomes crucial to the subsistence of an already existing relationship. Another one of its merits is in its online communities, specifically in its capability to connect strangers, who would never know each other if not for social media, with one another online. People of all ages, careers, races, nationalities, financial and social statuses come together through their joint interests and share information with one another. Through social media, we can enhance communication, sustain existing relationships, and create new friendships – it has clearly improved many aspects of interpersonal relationships.

When speaking of interpersonal relationships, one must consider direct, face-to-face contact and communication. One of the main downsides of social media is that it hinders people’s ability to speak straightforwardly to one another and not simply through digital devices. Since social media is the medium through which people communicate to one another, this results in zero need for physical and personal contact. Slowly, people get so accustomed and comfortable with this convenient form of indirect communication, that they begin to prefer it over physical communication – engendering an addiction. As I had stated earlier in my essay, when we step into a room nowadays, most people are on some form of social media instead of interacting with one another. While they are all physically present in the room, their minds are elsewhere, wandering through the vast, virtual realm of social media. They have gotten increasingly more comfortable with their devices, that instead of engaging with others in the same room, they choose to slide back into their comfort zones and retreat to the technological realm.

They gradually begin growing more and more addicted, absent-minded, dependent, and invested in social media and they grow less and less capable of absorbing, experiencing, connecting, and simply living in the present, empirical world in which they were born in. Day by day people grow more distant and withdrawn and grow less connected and communicative – they devote more of their time and concern to their social media profiles and they start losing sight of what is truly significant about the real world and real relationships with others.

The growing dependence of modern society on social media is worrisome, to say the least. Two decades ago, social media had never even been heard of, and now two decades afterward, it has become an essential part of our lives as human beings. When it comes to social media, we are at a loss. We don’t know how to deal with it and especially how to deal without it, now that we have become so reliant on it. Social media’s impact on interpersonal relationship is definitely critical in the formation of our society’s future, and it is for this reason we must make an effort to change our growing dependency on social media. Ultimately, social media has the capability to impact interpersonal relationships in a positive way, however only if used accordingly, carefully, and timely.

Social Media’s effects on how we deal with relationships today is very clear. The change from a decade or so ago until now was drastic, to say the least. I chose this topic because I believe that this should be made known to people around the world — it is an important topic that may greatly affect our future and how we go about our relationships.