In order to achieve the purpose of this essay, it is important to specify an area of discussion. Therefore, this essay will discuss and explore the psychological impact of social media on adolescents. The term “adolescent” is defined as “the period of life between ten and nineteen years old” by the World Health Organization.

Social media in its relation to poor body image and depression is a topic of widespread discussion, and even debate. In order to explore the true impacts of these side effects of participating in media, the finer elements involved must be examined. 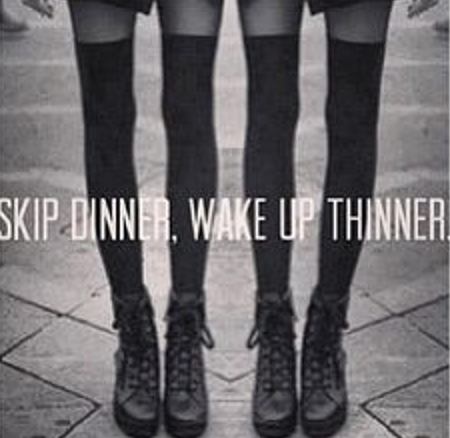 Social media will forever bask in its infamy of projecting the “ideal body” to users of all platforms. Some platforms even include pages for “thinspiration”. Thinspiration is simply inspiration to be thin, and is completely different from “fitspiration” (even this pushes the ideal body issue, although in a more constructive way). These pages of thinspiration often have a startling resemblance to pro-anorexia websites (Taryn T., 2012). An example has been provided to the right. Whether one prefers to believes it or not, their body image is impacted greatly. This is especially true for adolescents, who are no stranger to poor body image. In fact, a study reports 81% of ten-year-old girls are afraid of being fat (“Young Girls, Body Image”, 2015). This is even without examining how social media further exacerbates the issue at hand.

Meier & Gray (2014) aimed to investigate the relationship between the activity of adolescent girls on Facebook and body image. Participants completed a survey beginning with a demographic questionnaire which was followed by a Facebook questionnaire. The Facebook questionnaire asked that participants indicate typical Facebook use ranging from “never or almost never” to “two or more hours”. Then, a list of twenty-four individual Facebook activity usage amounts was indicated on a basis of “never or almost never” to “more often that once a month”. The Facebook appearance exposure (including but was not limited to photos) portion of the questionnaire was positively correlated with internalization of the thin ideal, self-objectification, and drive for thinness. The appearance exposure section was also negatively correlated with weight satisfaction (Meier and Gray, 2014). In simpler words, the results indicate the images seen on Facebook instigate one’s longing to be thinner, naturally accompanied by weight dissatisfaction.

Furthermore, in 2014 Mabe, Forney, and Keel conducted a study which examined the link between Facebook and disordered eating. The researchers found Facebook use was associated with greater disordered eating, greater concerns of body weight and shape maintenance, and state anxiety compared to alternate internet behaviors. State anxiety is known as “a temporary condition in response to some perceived threat” (Hatfield, 2017). For example, the anxiety one may encounter when about to and while giving a speech would typically be acknowledged as state anxiety, since the anxiety subsides once the task has been completed.

These studies help one in understanding what impact social media has on adolescents and their body image, which establishes the way in which social media can affect one’s eating habits. This side effect of social media cannot and should not be ignored. Adolescents should be taught to proceed with caution for more than the surface level issues social media presents such as catfishing, sexual harassment, the list goes on. However, the subtle impacts of social media linger without any real acknowledgment from both its adolescent and adult users. These individuals should be aware of both the obvious and subtle dangers of using social media. Perhaps then social media would not be as harmful to its users.

Social media has also been connected to depression. It has not only been discussed as an instigator of depression, but also as a tool of indicating depression in individuals. A study examining depression in Instagram users reported “depressed people were less likely to use any filters at all, but when they did use filters they went for Inkwell, which makes everything black and white” (Chen, 2016). Researchers also discovered those suffering from depression “have fewer faces in their photos, but they tend to post more photos with faces” (Chen, 2016). While it can perhaps be useful in this regard, it is important to keep in mind how social media impacts those facing depression.

Burke, Marlow, and Lento (2010) aimed to validate the common self-report scale by using empirical data from Facebook, as self-report studies are not generally considered a reliable means of gathering data. Participants consisted of Facebook users recruited from an ad on Facebook. All participants were given a social well-being survey. A subset of participants were given a Facebook Intensity Scale as well, in order to validate their self-reports of site activity. The social networking site activity for each participant was recorded for two months prior to the survey. Older users reported lower levels of bonding social capital, which the study described as emotional support from friends (Burke et al., 2010). The study also found men were lonelier and had less bonding social capital than women. The study defined [social media] consumption as the monitoring of all the content not specifically targeted at a given user. Researchers found consumption was associated with increased loneliness as well as reduced bridging social capital, which the study defined as the access to new information through a diverse set of acquaintances (Burke et al. 2010). Burke et al. (2010) helps one begin to evaluate the impact of social media on a user’s loneliness, which is commonly associated with depression.

I chose this topic for my essay because, being in IB, I have previously written an essay on the same topic (much more in depth). I was therefore rather knowledgeable on the topic, and determined this topic would be the best option.