Search The JARVEE Knowledge Base

byElaina M
You are here:

To make the Instagram accounts look more human and natural, and to reduce the number of blocks received while using the tools. We’ve added an option to change how the Follow, the Unfollow, and the Like tools execute actions. It’s called “Contextual Actions.”

A lot of Jarvee’s users tried the option already, and they reported great results using it. We’ve been improving it in the last few updates, and now it should work smoothly without issues.

If your accounts are executing, follow, unfollow, and like actions without blocks while using the API or the EB, there’s no need to use the option. It’s better to keep using what’s already working for you. Otherwise, this guide is for you.

Emulating human behavior works well with the “Contextual Actions” option, and should help even more with the blocks.

All you have to do is keep the option to disable emulating human behavior unchecked under the advanced profile settings of your Instagram account.

You can use the option when running the accounts on the API as well.  Make sure the option “Enable api full emulation*” is checked in the advanced profile settings. Otherwise, the option wouldn’t work at all, and the tools would execute actions as if the option is unchecked.

How does the “Contextual Actions” option work?

To make it easy to follow this guide, we work with examples. We focus on the Follow tool first because the same principle applies to both the Unfollow and Like tools as well. However, the tools execute actions from different contexts.

We configured the Follow tool to execute 6 to 12 follows per operation with 20 to 40 seconds delay between each follow. We enabled the “Contextual Actions” and set it to follow 1 to 5 users after each main follow with a delay of 0 to 8 seconds.

You can use any sources you want because the “Contextual Actions” option works with all of them. We used the “followings of Nike” in our example. 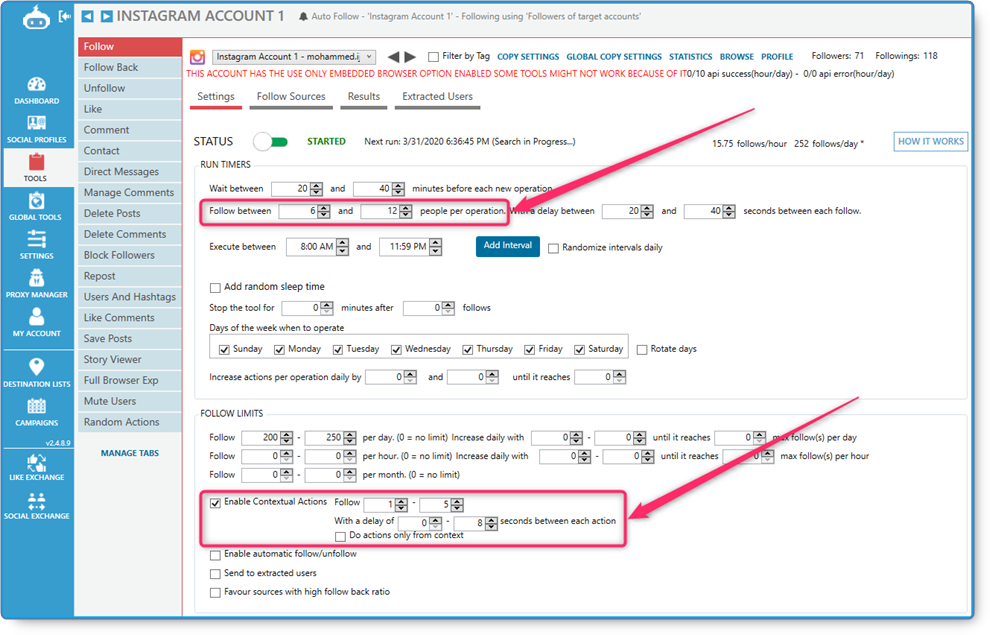 Behind the scene, the Follow tool picked a random value between 6 and 12, and it was 8 for the particular operation we are about to detail. The users, in order, that the tool extracted from the source used (followings of Nike) to follow them are:

Below is a screenshot from the DASHBOARD > Summary tab of the exact operation detailed above:

You might notice the sub-option in the “Contextual Actions” of the Follow tool by now, and you are wondering what it does precisely and how it works.

As the name of the option suggests, when you check it, the Follow tool would execute the actions only from context. That means when it visits a profile, it won’t follow it then follow from it as a context. Instead, it visits it and follows directly from its context.

The Follow tool picked 7 users to follow this time. The steps we explained in the example above are still the same. Still, instead of following the first user, the tool uses it as a context. It follows from its suggested users’ section and its follower/following list.

The screenshot below shows the log of the operation. Each colored rectangle represents a different “Contextual Actions” operation with a different user used as context:

The difference between the “Contextual Actions” option in the Follow tool and Unfollow and Like tool is the context used to execute actions. Also, think of the Unfollow and Like tools as having the option “Do actions only from context” checked by default. All the actions executed using the 2 tools are strictly from context when the option “Contextual Actions” is in use. In what’s following, we explain how the tools execute actions in detail below.

For the Unfollow tool:

The tool visits your profile and clicks on the “following” list then it unfollows users from there.

Note that the tool is not unfollowing users randomly. Instead, it unfollows the users based on the settings and filters you configure in the Unfollow tool.

Find below a screenshot from the DASHBOARD > Summary tab of an Unfollow operation while the “Contextual Actions” option is enabled. We configured the tool to execute 6 to 12 unfollows per operation and 1 to 5 contextual actions.

Similar to the Follow tool, when the Unfollow tool started the operation, it picked a random value between 6 and 12, and it was 8. Also, it extracted the users to unfollow then it proceeded to unfollow them in the steps below:

It goes on that way till it unfollows 8 users, then it stops and marks the operation as finished.

Here’s a screenshot of the operation from the DASHBOARD > Summary tab. Each colored rectangle refers to a single “Contextual Actions” operation. 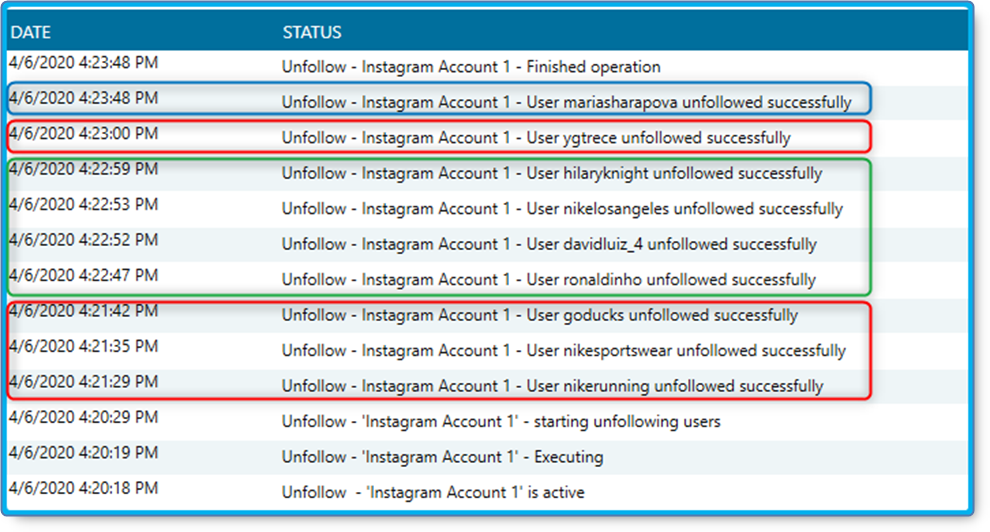 The context of actions for the Like tool is the feed. It keeps scrolling in the feed and like the posts.

Note that the likes the posts based on the inputs you add to the Sources tab of the Like tool.

The settings are 6 t o12 posts to like per operation with a 15 to 30 seconds of delay between each like, and 1 to 5 contextual actions with a delay of 0 to 8 seconds.

The steps the Like tool executed the actions are:

Same as the Unfollow tool, it continues that way till it likes the number of posts it’s supposed to like (7 posts), then it stops and marks the operation as finished.