The beauty of social media is that you can go from anonymity to stardom in the span of a few days. But attaining social media success is easier said than done. You have to plan and execute strategies to keep your audience engaged every single moment.

With that said, there are brands that have discovered the winning strategy for their values, personality, and voice. They know what their followers want, and deliver it over and over again. These influential brands shine on Facebook and Twitter and can teach you a thing or two about standing out on social media. Learn social media marketing from the best of the best.

Coca-Cola is unique in that unlike most brands that have pages on Facebook, it does not keep all of its products under one page. Instead, it has individual pages for most of its products; there is one for Fanta, Diet Coke, and even Dasani. It splits up individual brands to get more fans.
The lesson taught by this very popular company is that it’s important to have different pages for each product so that clients and prospects get to appreciate them individually.

RedBull is one of the best companies on Facebook in terms of branding. Its unique feature is that it hardly ever highlights its products. You will not find RedBull merchandise strewn all over its timeline. Instead, the company associates itself with extreme sports that seem to go with its famous tagline, “RedBull gives you wings.”
When marketing your brand or business on Facebook, follow Redbull’s example. Don’t be aggressive, be smart. Avoid promoting your products and services all the time and simply share content your audience loves.

Disney is one of the brands that reign on Facebook. It stands out due to the fact that it uses popular images to communicate and interact with its followers. The company showcases the same characters that feature in its films and TV programs: Mickey Mouse, Snow White, Rapunzel, Winnie the Pooh, and many others.

To increase engagement on Facebook, display products and services your followers are familiar with. They will develop a sense of belonging to your organization.

In October 2015, MTV took part in sensitizing people on the United States National Coming Out Day. This was outstanding because, in most cases, brands keep off sensitive matters. However, the way in which MTV handled the matter saw many of its fans lauding it. In addition, MTV continues to carve out a niche for itself as a pop culture icon.

The brand concentrates on its fans and satisfies their needs. If you want your brand to be as popular as MTV, know what your followers want and deliver it.

Oh, the smell of freshly brewing coffee! What’s not to love about it? Starbucks epitomizes coffee, and people love coffee! No wonder the brand has more than 36 million fans on Facebook. Its popularity lies in its preference for combining text with images. It also holds wonderful promotions for fans and offers free recipes.

If you learn nothing else from Starbucks, learn that fans love freebies. 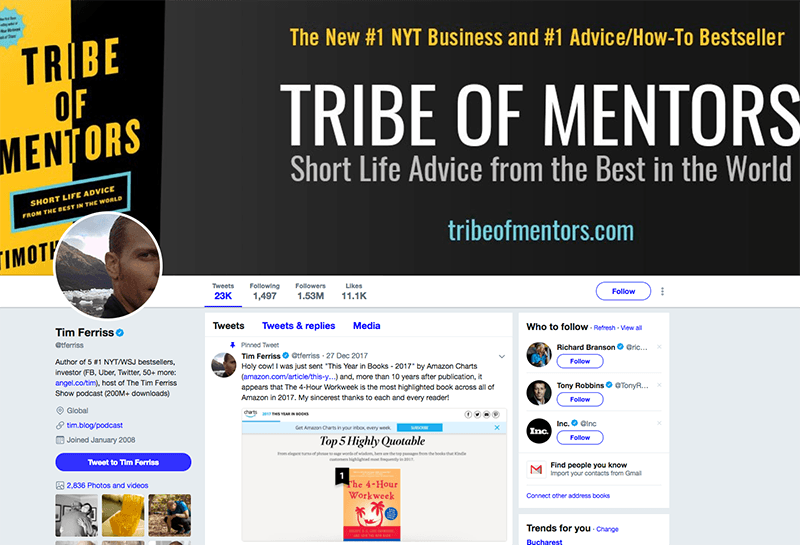 Tim Ferris is the author of several bestseller books for entrepreneurs, but you probably know him from his famous podcast – The Tim Ferris Show, the first business-interview podcast to pass 200 million downloads. Tim offers life coach advice and startup strategies to help young entrepreneurs build their businesses, be healthier, stronger and become better at … life in general.

He frequently shares inspirational tweets which are widely shared. He also covers various topics, from entrepreneurship and investment to weight loss and fitness. Borrow a leaf from him and start tweeting about valuable, interesting, and relevant things. 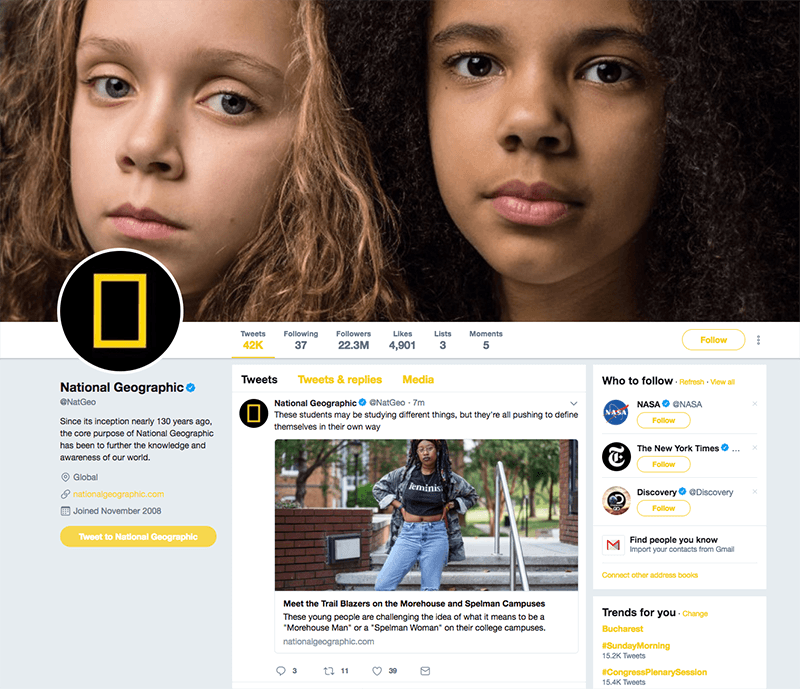 Despite being 127 years old, NatGeo ranks highly on a very modern marketing platform. It has some of the best content online. It dishes out interesting tweets every day that are a joy to read. One day it will tell followers about how geckos change the angles of their toe hairs to turn their sticky toes on and off, and another day it will post dramatic images of wildfires.

Nat Geo understands the importance of visual storytelling. So, what can you learn from Nat Geo? That rich content is everything! 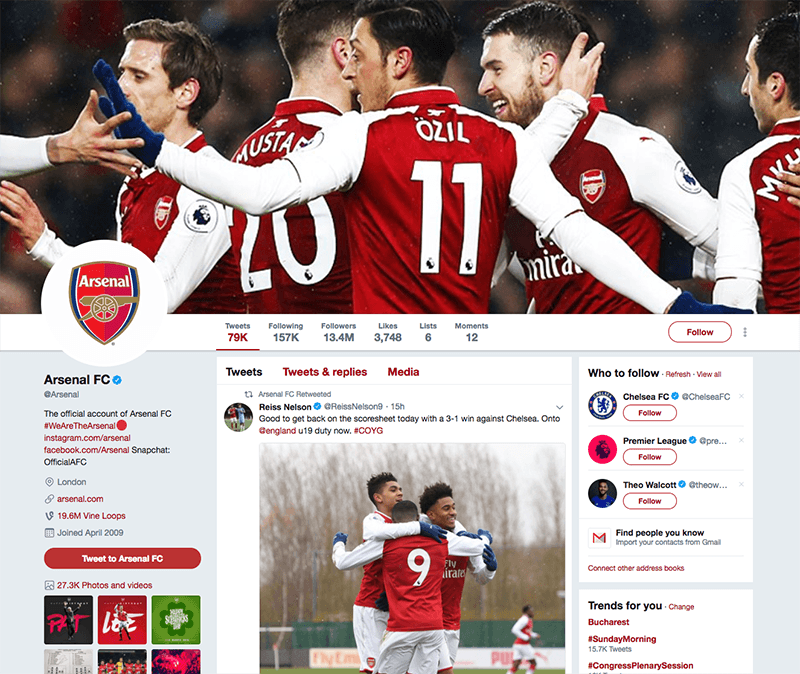 Why is Arsenal so popular? Because it connects players with fans. The football club engages with its supporters in a personal way. Arsenal is so popular it has more fans in Tottenham and Chelsea than the football clubs. The account is followed by fans, bloggers and journalists. It posts football content regularly keeping followers wanting more.

Arsenal is all about entertaining fans, and you should follow suit if you want to attain social media success. 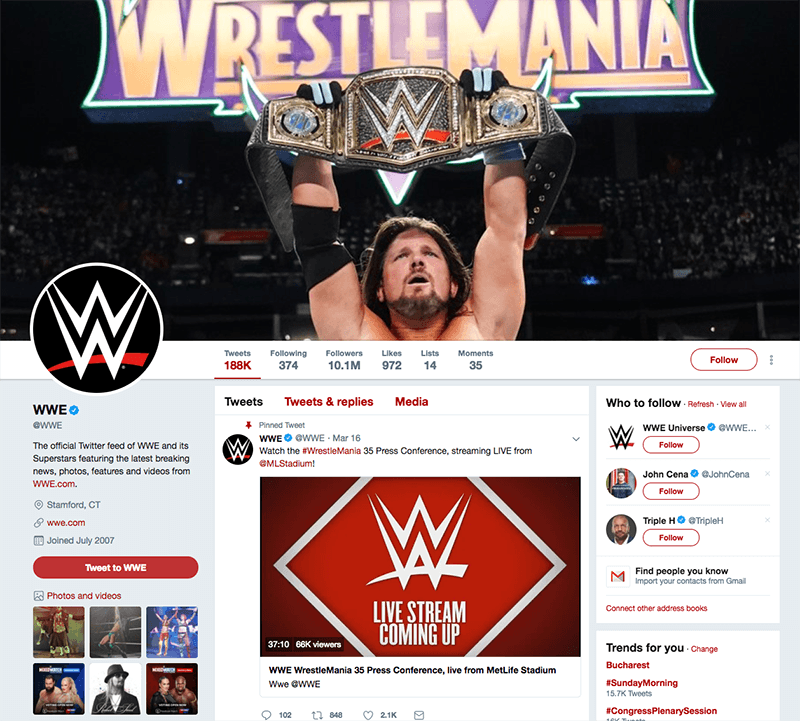 WWE, despite being an old player in the entertainment industry, has a massive fan base on Twitter. The dominant aspect about WWE is that after its shows, fans flock to its page to continue the conversation there. As a result, the fun never ends.

Adapt WWE’s strategy and allow your followers to participate in your brand’s activities. Let them voice their opinions freely and offer valuable feedback. 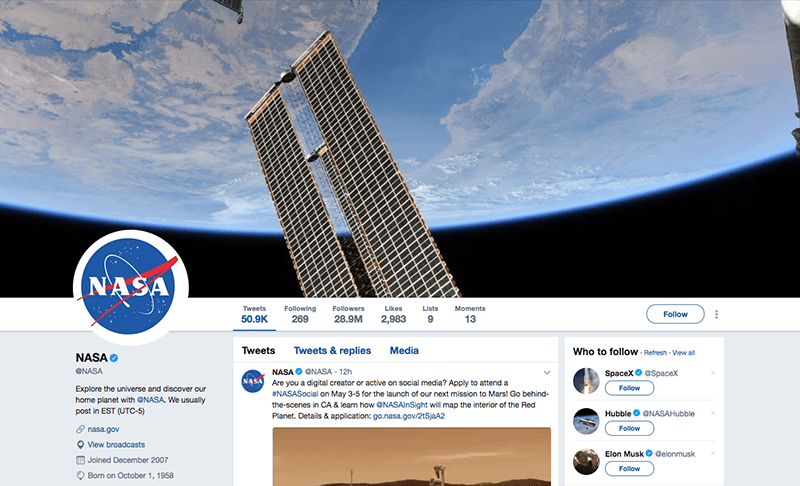 The master of outer space also ranks highly on Twitter. NASA maximizes its influence by engaging influencers. For example, it tweeted a happy birthday message to Leonard Nimoy of Star Trek. It also reached out to Justin Beiber, who has at least 36 million followers on the platform. It explained that engaging an influencer like Beiber was critical because by forming a link with his young followers, it could influence them to study STEM careers.

This is one of the biggest lessons that social media marketers should learn. Instead of trying to succeed alone, reach out to related influencers to form beneficial partnerships.

These influential brands have attained success on two of the largest social media platforms in existence, but they didn’t do it by chance. Each one of them applies a unique strategy to capture followers. As if this is not enough, the brands apply interesting tactics to keep their followers engaged. If you are looking to build your brand, emulate these tactics and modify them to suit your target audience.